In Part 4, "Extracellular matrix," it is noted that hyaluronic acid is used as a therapeutic drug for joint diseases and as an auxiliary agent in the ophthalmologic field. What complex glucides other than hyaluronic acid are used for medicine?

Elucidation of the functions of hyaluronic acid has been advancing. Application is expected not only use in locomotive diseases and ophthalmology but in many other fields. Sugar chains such as heparin and chondroitin sulfate that belong to the same proteoglycan classification as hyaluronic acid are widely used as medicine.

Heparin has expresses anti-coagulation activity via antithrombin III in blood. It has long held a firm position as an agent for maintaining blood circulation. In recent years, low molecular weight heparin, which is improved heparin with less bleeding effect, has been used as an anti-thrombotic drug. Further, as the oligosaccharide structure of its active portion is elucidated, development of anti-thrombotic drugs that utilize this active oligosaccharide chain has been realized.

Chondroitin sulfate introduced in Part 5 has also been used as pharmaceutical medicine for over half a century. Its efficacy is confirmed for joint pain, nerve pain, and frozen shoulder as well as for preventing dry cornea, and it is contained in medicinal/generic eye-drops. With more and more people suffering from dry eye, this is likely to be the most familiar complex glucide applied to medicine.

In addition, application and development of polysaccharides such as chitin and chitosan, which are proteoglycan analogues, in medical devices has progressed. Crab and shrimp, for example, which are raw materials for chitin and chitosan, are abundant as well as easily procured. Their application is expected to be expanded in the future. It should also be mentioned that polysaccharides such as dextran produced by microorganisms have long been used in infusion as a plasma expander, and that polysaccharides from plants are utilized as anti-cancer agents and in health foods.However, the efficacy of polysaccharides used in health foods remains to be elucidated. 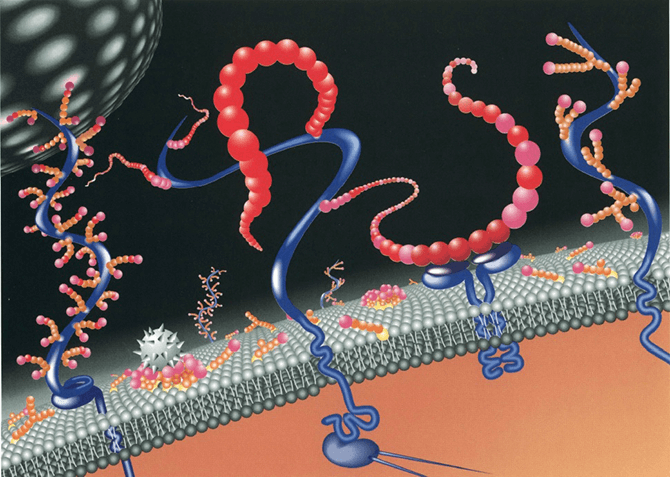 What kinds of research apply knowledge of glycoscience to medicine?

There are not so many examples yet of glycoscience applied to medicine. Glucides, however, play an inherent role in the processes of development and aging, as well as infection, immunity, inflammation, and diseases such as cancer. Since the elucidation of their mechanism is currently making rapid progress, there is no doubt that doors will be opened to new clinical applications.

A few examples are given below.

An example of development based on knowledge and technology of glycoscience is therapeutic drugs for influenza (neuramidinase inhibitor). Now that various cell surface sugar chain molecules associated with viral and microorganic infections as well as the mechanisms associated with such infections are being elucidated, further progress in the development of anti-infection and therapeutic agents is anticipated (see Part 9).

Elucidation of the alteration of sugar chains on cell surface accompanying cancer and its mechanism has become increasingly useful for diagnosis and therapy (see Part 8). Moreover, work on the involvement of heparan sulfate and hyaluronic acid in cancer metastasis, implantation, and proliferation has also progressed, and the development of novel therapeutic drugs and appropriate treatment guidelines are anticipated from the knowledge gained.

Another example is a glycoprotein (bioactive substance) which has been genetically engineered for mass synthesis and applied to medicine. Erythropoietin (EPO), which is mainly secreted from kidneys and produces red blood cells, is widely used for treatment of renal anemia. It has recently been found that the duration of its effect in the body depends on the amount of sialic acid at the end of the sugar chain terminal of erythropoietin. The introduction of sugar chains to active substances produced by genetic recombination is expected to be an important technological medical tool in the future.

Where is the current research on glycoscience headed?

Research on glycoscience is divided into two fields: glycobiology and glycotechnology. The former focuses especially on the elucidation of diseases, and the latter on analytical and manufacturing technology.

Cloning research for major genes associated with sugar chain synthesis is mostly established, and association between these genes and specific diseases, as well as overall relationships with life phenomena from development to aging, will become the issue in the future. In addition, to promote such research, the construction of useful databases as well as completion and provision of gene resources and sugar chain libraries, etc. are also important.

A particular example of activity is the project "Development of Novel Diagnostic and Medical Applications through Elucidation of Sugar Chain Functions" by NEDO (New Energy and Industrial Technology Development Organization). This project is carried being out with the collaboration of industry, academia and government, and aims, for example, to: 1) purify and specify sugar chains that have the potential to be various disease markers, 2) develop fundamental technology for detecting slight changes in sugar chain structure, 3) verify sugar chain function, and 4) develop substances that specifically interact with certain sugar chains.

In addition to this project, development of diagnostic imaging technology using sugar chain disease markers, development of drug delivery systems that use the specificity of sugar chains to transport agents to the affected site, and applied research on regeneration medicine, etc. have been carried out. Until recently the focus of glycoscience was fundamental research. However, it is now entering a new stage directed towards the diagnosis and treatment of so-called intractable diseases.

To further expand glycoscience research and to broaden its potential in applications to medicine, collaboration with fields such as genome and protein research has become an important issue. Various functions of sugar chains are expressed only after interaction with other molecules responsible for life. Progress in fundamental technology appropriate for glycoscience and accumulation of knowledge are of course important. However, collaboration in research across different fields will increase the contribution of glycoscience to medicine and health.

Research from a new points of view such as system glycobiology will become ever more necessary.

♦Japan Consortium for Glycobiology and Glycotechnology
This is a consortium organization that organizes the network of sugar chain research centers in Japan. It aims for the establishment of cooperation system regardless of agency, exchange of research information, people-to-people exchange, and database network between designated research institutions.

♦Glycoforum
In "GlycoWord", a subcategory of "Glycoforum", key words of research in glycoscience are classified into genres, and a specialized researcher in each field has written a commentary. 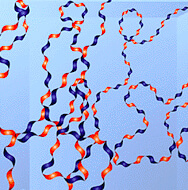 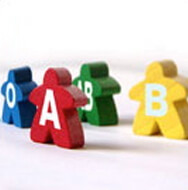