A famous example of "crossbreeding" whereby a sperm and an egg from different organism species are joined and grown into an adult individual is the generation of a mule by the mating of a horse and a donkey. However,  such examples are rare in the animal world, and it is widely known that crossbreeding does not normally occur. Why doesn't crossbreeding occur?

It is because sperms and eggs have an inherent mechanism to distinguish its "appropriate" (homologous) partner.

When we human beings recognize a particular partner from many people in an instance, we unconsciously use a sense organ called the eye.  Sperms and eggs, however, don't have a sense organ equivalent to the human eye.  How, then, do sperms and eggs recognize an "appropriate" partner?  They have a mechanism similar to that of an antigen-antibody reaction often compared to a key and its keyhole, which allows them to identify their partners with more strictness than sense organs.

Your house key of course cannot open your neighbor's door.  This is because each key and keyhole has different shapes, so another key will not fit in the keyhole, or even if it did, wouldn't allow it to turn.

Eggs are generally covered with one to several layers of coating (membranes on the outside), the form of which varies depending on the animal species.  For example, mammals have a clear zone, and echinoderms such as sea urchin and starfish have a jelly layer on the outermost layer.  The sperm receptor described earlier is in the clear zone or jelly layer.  When a sperm becomes gently attached to egg coating after strict mutual recognition, it binds to the sperm receptor, specifically the sugar chain portion, then penetrates the egg.

Therefore, the sugar chain can also be referred to as the "supporter" that coordinates the encounter of a sperm and an egg in the process that is fertilization. 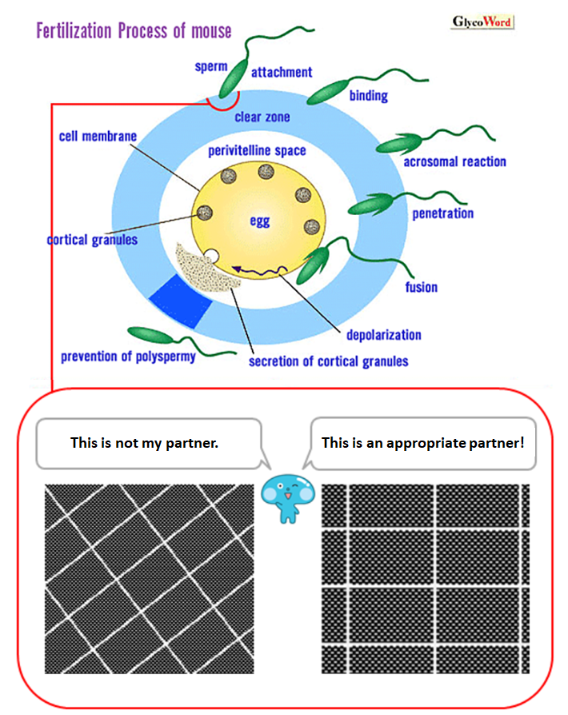 ▲ Sperms identify whether or not an egg is its appropriate partner like humans recognizing a pattern on a rug.

Does that mean sugar chains play an important role in the fertilization mechanism?

The molecular mechanism of the mutual recognition of a sperm and an egg is being elucidated in various animal species such as invertebrates invertebrates (such as sea urchin, starfish, sea squirt, and drosophila) and mammals (such as mouse and pig).  By combining the results of previous researches, it is believed that in many species the sperm binds to the sugar chain portion on the glycoprotein in the egg coating.  Since fertilization is a basic phenomenon in organisms, it can be said that such a common mechanism was conserved through the process of evolution.

Molecular research relating to human fertilization still has far to go.  If the identities of substances associated to fertilization are clarified in the future, it is possible to utilize them in the development of new contraceptive drugs that prevent the binding of a sperm and an egg or in the development of therapeutic drugs to treat infertility based on molecular abnormality.  It is believed that sugar chains play an important role in the interaction between the human sperm and egg as well.

♦ Glycoforum
In "GlycoWord", which is a subcategory of "Glycoforum," key words of research in glycoscience are classified into genres, and a specialized researcher in the field has written a commentary.
Fertilization and Sugar Chain 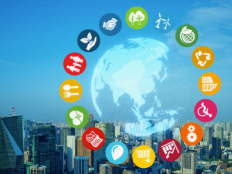